Why I, A Person With Autism, Enjoyed The Netflix Series ‘Atypical’

I’ve seen many reviews of the latest Netflix series, Atypical, which features an 18-year-old man with autism named Sam and the struggles he and his family go through during his senior year in high school, particularly as he attempts to find a girlfriend and learn what it means to fall in love.  I have seen all episodes of the first season and am now going to share my views.  Be advised: SPOILERS AHEAD!!!

I had the privilege of attending a private screening of the first episode of the show at Netflix Headquarters in Hollywood immediately before the series launched.  Here, I met the show’s creator, Robia Rashid, and, during a question and answer (Q&A) session that followed the screening, heard why the show was created and who inspired it. 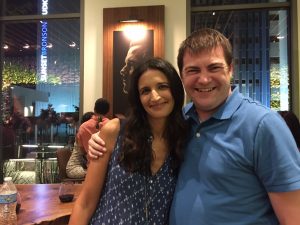 Unfortunately, the show has received poor reviews by many people in the autism community for a number of reasons.  Some say that the show’s writers didn’t consult with enough people with autism (versus professionals working in the field of autism).  Some feel that the show should’ve had someone with autism play Sam instead of Keir Gilchrist, an actor without autism.  Some believe the show actually makes fun of autism!

Let me address each of these views and offer some information I learned at the screening of the show. 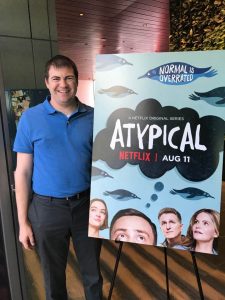 At the screening, I found out that Robia has a close family member on the autism spectrum.  The show is based on her experiences growing up with this family member.  During the show, Sam offers vivid, empathetic descriptions on what he is feeling or experiencing in certain situations or why he does the things that he does.  This has the potential to break certain stereotypes associated with autism such as “people with autism want to or prefer to be alone” when they actually do want relationships with others but may not have the experience, knowledge or courage, for example, to initiate the process.

It also came to my attention during the Q&A that a number of people, both with and without autism, auditioned for the role of Sam.  The casting personnel of the show put forth efforts to and successfully did include and employ people on the autism spectrum.  Even though Keir ultimately got to play Sam, the show did feature actors with autism that added value to the episode(s) that they appeared in.  For those that live by the motto, “Nothing about us without us,” when it comes to Atypical, know that we (us) and our input were at the very least considered in many aspects in the creation of this series.

Finally, it has been suggested that the show is a parody intended to bring more humor, almost to the point of making fun of autism, as opposed to more understanding about autism.  I ask you this question…when was the last time you laughed at yourself?  We’ve heard the saying, “Someday we will look back on this and laugh,” but when was the last time you reflected back on how far you have come as an individual?  When I was in school, I, too, was the kid that wasn’t “all there” in my peers’ eyes and I said and did things that caused my peers to laugh at me.  It was after I learned WHY it was silly of me to do the things that I did and say the things that I said, as well as my tastes and interests in women evolving over the years, and being brave enough to do new and sometimes scary things, did I realize those experiences have made me a better man today.  That’s why I look back on those situations and smile.  Laughter really is the best medicine and if we are unwilling or unable to learn from our mistakes, or at least see the humor in them, we may continue to find it difficult to get out of our own way.

Again, I get that everyone may not relate to every episode on every level and I also understand that some episodes such as the one featuring Sam’s meltdown on a bus as a result of being rejected may bring up past traumatic events in people’s lives.  I urge you to watch the show anyway, preferably with family, friends and others that care about you.  Asking yourself or having others ask you questions beginning with “Remember when…?” or “How did I/you feel when…?” can help you see opportunities for your own personal growth (because we should never stop learning and always keep on growing as humans) by relating the show to your life on some level. 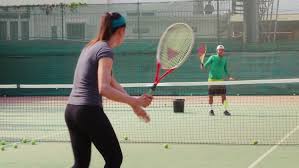 I’ll give you an example.  Sam has a younger sister named Casey.  Like Sam, I also have a younger sister that looked out for me, stood up for me and even informed my parents if I was doing something I shouldn’t.  I remember when I was calling a girl that I liked multiple times without response and the girl was getting ready to go to the police.  Luckily, the girl went to my sister first and my sister informed my parents what was happening.  As a result, my parents explained the rules of “the tennis game.”  A conversation is like a tennis game, with one person serving the ball and then the other person serving it back.  It’s not a conversation if one person is doing all the talking or all the “serving.”  Since I was doing too much “serving,” my parents set the rule that I get to call a girl (“serve the ball”) twice and if she doesn’t call back, then I have to find another girl to play with.

In all honesty, I wouldn’t be surprised if one day my sister writes a book or does a show or something along those lines about her experiences with me during high school and in the years leading up to it.

In summary, we can learn a LOT about OURSELVES, not just autism, from Atypical even if it’s only based on one person’s experiences with a close family member.  If you’ve given up on the show after the first episode or two, I encourage you to watch at least one more episode and be open to the positive possibilities that the show offers you and your potential to be an even better person.  You may be surprised what you learn about yourself and, in the case of Sam, getting out of your comfort zone and being open to the suggestions of others like Sam’s co-worker, Zahid, it may bring someone into your life that later becomes your girlfriend!

For more information on Atypical or to start watching (again), please visit https://www.netflix.com/title/80117540